Hello to My  S.M.A.A.R.T. Moms! What a Fantastic Turn Out! There were sooo many people that were there to show their support.
Although I think Dustin was a bit disappointed. You see for the past six years we have been attending the November Adventures in Autism Event held at Universal Studios of Orlando. Well, sad to say this year Universal stopped offering A.S.G.O. the discount tickets. And typically we attend the Autism Walks in April/ May. So I think he thought the Autism walk was actually going to be Universal Studios. Which of course, if I'm right, it would explain why he wasn't so thrilled when we got to the Autism Walk. He did get to see Jeffrey from ToysRus and some other characters. But Dustin only lasted about 2hrs before saying, "I'm Hungry. McDonalds?"  "Ten Chicken Nuggets, three french fries, and dr. pepper?" His typical order by the way. He is 15yrs old now after all:)
So we left but not before getting some wonderful pictures and videos. You'll just love the last video.........We just parked at McDonalds when I video taped Dustin. Sorry we missed some of you, but I really do Appreciate the Moms that were able to come. Maybe next year it'll be even better! Watch for me next month for S.M.A.A.R.T. Mom's December Mommy Time-Out. Our boys and girls will be out for the holiday so you better believe there will be a December "Mommy  Time-Out" before their Holiday Break. So watch for December's Posting to the right of my site. Until then...........Take Care. Angela


P.S. I just wanted to throw a Big HUG to my Dad and his really Sweet Wife, Dianne and say Thank You so very much for my early birthday card and present:) When we got back home from the Autism Walk I checked my mail and found an early birthday card from my Dad and Dianne. Thanks to both of them I plan/planned to take Dustin to Universal Studios Nov. 20th. However, I said planned didn't I.....well if I don't have the luck and have a talent for the unbelievable. The next day, after the walk and my plans for the 20th. I went to get some batteries and dropped a "AAA" Battery; of course it couldn't  be a "D" battery it had to be a "AAA" battery! When I went to pick it up; I COULDN'T GET BACK UP. OMG! I yelled for my husband, only to then stop and say to myself........."I can't believe I actually have fallen and can't get up. Is it time for Life Alert now? I'm  only going to be 43yrs old in a few weeks!"
Anyway, at least  I'm getting better now, it's taken a few days, but at least I didn't set that date (the 20th) in stone on the calendar for Dustin. I hear Universal Studios has Wonderful Christmas Displays in December and that IS actually the month of my birthday. So I guess that's when I think I will be taking Boo Bear. We Both just LOVE Christmas!  I do have another Mom coming with me for "Back-Up" my back that is (LOL). Wish us Fun Everyone and Thanks Again Dad &  Dianne! We  Love you!
(Click On "PLAY" to watch Video)

Hello Everyone! I just wanted to share our experience to the Renaissance. This was actually a school field trip and I do my best to attend every field trip with Dustin. This field trip was one I really didn't think Dustin would handle well, but I don't vear away from these outings. The Renaissance was a new experience for Dustin as well as for me. So we gave it a whirl. I brought his favorite friends, Bugs , Daffy, and Tweety to help comfort him while we were there and I did have to keep him moving. He lasted at least a couple of hours before he started throwing himself down on the ground and started getting loud and clearly ready to leave.  I think at that point Dustin's classmates were ready to go as well. So everyone agreed and back to the school we went.
I can't say we had a fantastic time, but I can say I wouldn't  try this again maybe next year. If I stopped revisiting ALL of the places I have dared to venture with Dustin.......and believe me there have been many not so memorable outings. BUT.... today you would have never had a clue of some of the stories I could tell you. TRY, TRY, and TRY AGAIN. Being consistant with Dustin has been so beneficial. So I strongly advise other moms to at least make the attempt regarding ANY outing. There may be some not so good memories to make, however, the memories that are successful are more than worth it. Hope you enjoy our pictures:) Take Care. 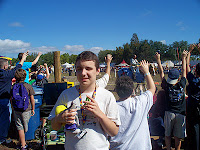 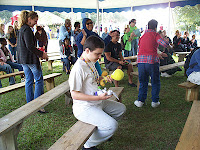 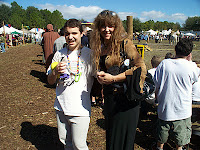 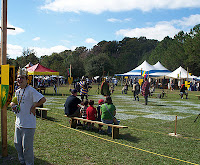 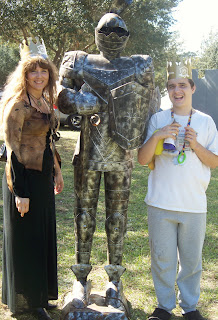 The date is quickly approaching....November 12th is almost here Moms! The temperature is going to be 75* for the high! You can't ask for a better day for this wonderful opportunity to express your support for Autism. It's not too late to sign up and join Dustin and I along with some other fantastic people. So once again "CLICK ON" the S.M.A.A.R.T. Mom icon below and walk for autism this Saturday. Remember you will be with other mothers who are coming together to think outside the box of autism. Bring your child or teen with autism. It will be alright. We are here if you need us. We know how crowds can be for these  guys. So take a deep breath and think positive. Our boys/girls have got to learn to cope with outings, what better than one where you are clearly not alone:)
See You There and Take Care! Angela 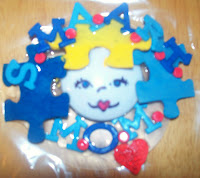