"The Tucker Cow Count Down"
Uh, What is that? I would imagine is what all of you are saying and if any of you watched my September Video last month "in its entirety" then you have probably been asking that question for a bit now. So here it is.... finally a video explaining this strange method I've created to help alter my teenaged son's self hand-biting behavior. It is a work still in process, however, like all of my behavior altering ideas, they do achieve success, so I'm optimistic that this will be no different. Also ,Keep in mind that I am extremely consistant with my ideas. I don't claim this will work on others like my son with autism. Every child, teen, and adult do differ on the autism spectrum. I do encourage my S.M.A.A.R.T.Moms to at least try my ideas just in case they are helpfull and can make your every day life with Autism a little less stressful for you and your loved one with autism. So in the mean time please let me know if this or any of my other ideas have helped you and yours OR if you might have an idea of your own that you found helpful and which led to a behavior success. Until Next Time........Big Hugs to all of my S.M.A.A.R.T.Moms! Take Care & Have A Very Happy Halloween! 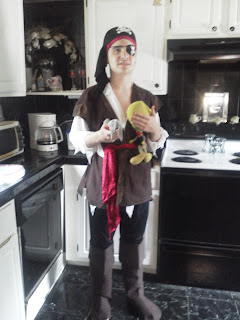 I took Dustin to Universal Studios using our annual pass. What a great time we had. After riding all of those insane roller coasters , which he never used to even go near... We went to watch the Barney show as usual and unlike the past 10 years or so, Dustin still poses or tries to pose under Barney's chin. This year was a bit difficult....he has really done some growing I guess (LOL) Too cute though he tried. I also  have this  wonderful video of Dustin and his Best Friend Bugs Bunny watch Barney & Friends sing the "I Love You" song. Yes , Dustin is still crazy about Barney ;) My oldest son is now 24yrs old, my daughter is 20 yrs old, and now that Dustin is 16yrs old I was really  hoping the Barney phase faded out.........Nope, guess not. I guess it really rings true when they say " The things we do for our children". I must admit though, watching him this year did bring tears to my eyes. To this day he still seems so innocent even  compared to how he was 15 years ago.
Until Next Time, Take Care & BIG HUGS from S.M.A.A.R.T.Mom 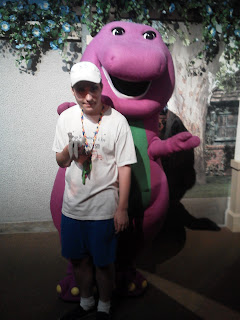 (Click On the Photo of Dustin & Barney to Watch the video)