What a Wonderful day at our farm until we lost internet access on Dustin's computer because of a storm that came through. So in need of a back up plan I began looking for games/ crafts to play with Dustin. The computer is EVERYTHING don't you know? Well, we had recently bought a pool table to amuse us in our spare time,but not once thought our Dustin would play . My husband of course showed Dustin how to play, the idea of it anyway. I was amazed how much Dustin was interested in what his dad was trying to teach  him. We let Dustin set things up by himself shortly after.....I guess he found "Dustin's Pool Game" more intriguing ;) It didn't matter though, it was so very enlightning to watch our autistic son play a game of billards. I know it sounds absurd, but this isn't something we ever thought he would even go near, never mind enjoy playing. Just another example of how WE as the parents of children/teens/adults should NEVER under estimate what they are able to accomplish.


I've posted some pictures of  Dustin being taught how to play billards by his Dad. If you would like to see the video of our Dustin in action just click on the interactive picture below ;) 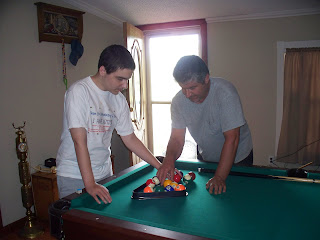 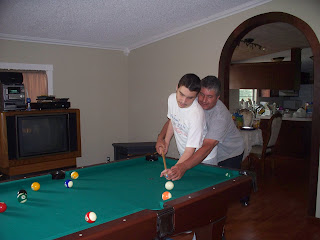 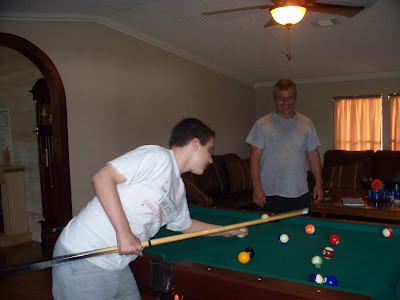